The new rail line in the city’s northwest is part of the largest public transport project the country has ever seen. In 2024, Sydney will have 31 stations and a 66-kilometre standalone metro line.

For this crucial first stage of North West Metro we designed eight new stations and precincts and upgraded five existing ones.

They’re places that make travel easier, safer and smarter – hallmarks of a world-class system. But they also add colour and life to their communities, with fresh spaces like plazas, parks and paths set around the striking new stations, drawing people into their orbit.

Whether they’re elevated stations, cut and cover or open cut, the new stations and precincts along the North West Metro line can all be defined by their recognisable station canopies. This way the rail line is connected by an easily distinguished characteristic. Each type of station has a corresponding canopy design that’s scalable and adaptable, generous, safe, efficient, sustainable – and beautiful. The station and its interchange are positioned within the future town centre, while a series of bridges make it easy to get around. Commuter parking facilities, pedestrian routes and bicycle access have all been incorporated. A formal avenue and tree-lined streets within the precinct are strong connections to the Cumberland Plain woodland setting.

The introduction of North West Metro, with its new rail station and integrated bus and cycle network, will transform Rouse Hill into a regional hub.

The plazas surrounding the architecturally striking elevated station give the people of Rouse Hill and surrounding areas a new, high quality public space, with traffic ​‘calmed’ to prioritise the safety of pedestrians. As a major traffic interchange, people can expect seamless transfers between rail, bus and other travel modes.

On the very edge of Sydney, Kellyville is part of the North West Growth Centre and its new commercial core. Accordingly, Kellyville and surrounds increasingly demands a transport interchange to seamlessly connect trains and buses and provide sufficient car parking for commuters.

The new, elevated Kellyville Station offers a safe, convenient and comfortable transport experience that will encourage people to choose the train over the car. More than that, the station forms the heart of a new precinct that’s designed to be a community hub, including social and art programs to bring people together.

Bella Vista Station and surrounding precinct are the focal points of the area’s future growth corridor, as well as a significant urban renewal undertaking.

The station is an immediate landmark between an existing business park and a future commercial growth area. The station is ​‘dual-loaded’ and the canopy design, entry sequence and concourse access all modified to accommodate its substantial interchange requirements, allowing people to approach the station from any direction.

The station precinct will include improved retail offerings, pedestrian-friendly streetscapes and station access, and places to keep the area buzzing. A nearby parkland corridor has also been improved.

Norwest Station and precinct are the critical missing pieces of the puzzle when it comes to servicing the local employment centre and the proposed high and medium residential area nearby.

By integrating with commercial development, making the area safer for pedestrians, providing simple access to all modes of transport and remaining flexible for future expansion, the new station underpins the renewal of the surrounding business park.

People have been heading to the Castle Hill Showgrounds for over 130 years. The new Hills Showground Station establishes an integrated transport interchange and makes the Showgrounds easier to access than ever.

The station also services a mixed-use precinct to the north, employment areas to the west, and medium density residential proposed to the south. It takes into consideration intended future developments and significant growth. The revitalised station precinct adds to the area’s strong sense of local pride and identity.

On the line between Showground and Cherrybrook stations, Castle Hill Station has revitalised Arthur Whitling Park. It was constructed using the ​‘cut and cover’ method to make sure it was thoughtfully integrated into the park, which was rebuilt on top of it.

The design of the station entry ensures it is immediately part of the park setting, while making safety and security a priority. It will make it easier for people to travel between the park and the local commercial growth areas.

Cherrybrook Station services a largely residential area and is surrounded by Blue Gum High Forest. As part of the North West Metro, the forest setting was extended, while our design for the station had to take into account this challenging topography, running tunnels and service buildings at both ends, and a large multi-level car park.

The station becomes a focal point of the community, with its entry providing space for community activities and the design minimising the impact of power lines. Walking and cycling paths connect to the surrounding streets and along the creek and bring the entire precinct together.

The station and precinct layout creates opportunities for future development and community integration. Our rail infrastructure needs to keep moving, no matter what the world throws at us next.

Distributed station entrances are the key to Hong Kong’s superdensity. 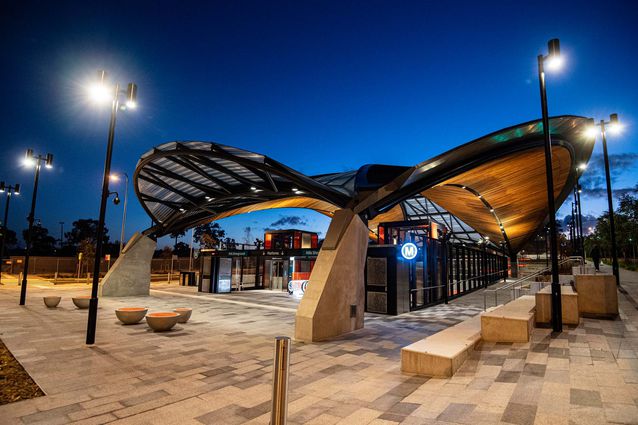